Go to the top

“We make a living by what we get,

but we make a life by what we give.”

Stewart Rahr created Rahr Enterprises when he sold his pharmaceutical distribution company, Kinray, to Cardinal Health for $1.3 billion in 2010.

Stewart created Rahr Enterprises to invest his money. He has long-term investment horizon and a fondness for entrepreneurs with creative ideas for making America more productive, strong, energy independent, and medically innovative.

Rahr Enterprises is also Stewart's base of operations for staying in touch with his many friends in the business, entertainment, political, and charitable worlds.

The offices of Rahr Enterprises are in Trump Tower at 5th Avenue and 57th Street. Designed by a team of Gensler architects and designers lead by Ed Wood, the offices unmistakably reflect Stewart's singular personality and charisma.

INVESTING IN OUR WORLD'S FUTURE

Stewart was born in Brooklyn, New York to a family of decidedly modest means. His father, Joseph, ran a pharmacy. Stewart worked alongside his father, "picking and packing" product for shipment to the customers.

Stewart took over the pharmacy after his father died in 1978. Under his guidance, the company moved from a tiny pharmacy on Avenue D in Brooklyn to a garage on Troy Avenue, then to larger quarters in Elmhurst, and finally to its 500,000 square foot facility in Whitestone.

Stewart ran Kinray with a determined focus on customer service. Realizing that the independent neighborhood pharmacy was becoming an endangered species in the world of the giants such as Duane Reade, Rite Aid, and CVS, Stewart determined to help them become more competitive.

He vastly expanded the products that Kinray offered, eventually including in its inventory every item that a pharmacy could conceivably want or need, from the full range of prescription pharmaceuticals to soaps and shampoos to hairdryers and beauty products. He forged innovative supply agreements with pharmaceutical manufacturers, capturing large discounts and promoting sales of lower cost generics.

He offered twice-a-day deliveries, assuring the pharmacist that the customer who dropped by with a prescription or request on the way to work could pick it up on the way home.

And, Stewart fiercely automated to keep his prices low and service high. Kinray was among the first private companies in the nation to purchase automated machinery that allowed orders to be filled by having baskets travel along a conveyor belt as they were fed various products from computerized picking machines, ending their trips at the loading station for the delivery van that would speed the error-free order on its way. Stewart learned about the existence of the automated system on a 1993 plane flight that found him seated beside an Austrian inventor who had developed the technology. Stewart listened eagerly and immediately invested heavily to adopt the system, years before his competitors could follow suit.

In building Kinray, Stewart built what he always called his "Kinray family". He knew most of his employees on a first name basis (and insisted that they call him by his first name). He knew that no business could succeed without a core of highly motivated, capable, and loyal employees, and he took care to offer extraordinary assistance to employees who faced special needs or tragedies.

The main ingredient to Stewart’s success, though, was not the equipment he employed or the talented team he assembled. It was his personal touch with his customers. Stewart got to know hundreds and hundreds of independent pharmacists. He learned about their businesses, their needs, their frustrations, and their dreams. He helped them win the support of their local political leaders in lobbying for the same kinds of Medicaid reimbursement that the large chains were receiving. He listened to them, and often times made loans to them, and they appreciated that he cared and helped.

Pharmacists who at first wished to order nothing, or only a smattering of their needs, gradually came to know Stewart and his company, and came more and more to rely on Kinray for all their needs. In time, Kinray’s increasing knowledge of the entire industry allowed it to offer invaluable guidance and advice to its customers, helping the small pharmacists to survive, grow, and thrive.

Over the course of four decades, Stewart built the business into an industry powerhouse. Stewart and Kinray were featured in dozens of stories published by Forbes, New York Post, Crain’s New York Business, and The New York Times. When he finally sold the business to Cardinal Health in 2010, Kinray employed more than 2,000 people, serviced more than 3,000 retail pharmacies, and had annual sales of more than $4 billion.

Even with all of his business success, Stewart does not think of himself primarily as a businessman, or entrepreneur, or investor. Rather, he is a giver. He is today, as he was during his years at the helm of Kinray, deeply committed to philanthropic causes. He wants to change the world, and he has endowed a charitable foundation, The Stewart J. Rahr Foundation, to help accomplish that mission.

Stewart also believes in having fun. He is an avid golfer, and frequently uses the game as an opportunity to further his charitable causes. His Celebration of Life parties at his summer home, Burnt Point, on Georgica Pond, have featured star performers such as Alicia Keys, David Foster, Lionel Ritchie, Katharine McPhee, and Andrea Bocelli. And, they have attracted a constellation of entrepreneurs, political leaders, and sports stars.

The majority of our funding is proactive and identified by our staff, but the Stewart J. Rahr Foundation accepts grant applications from organizations without discrimination of age, race, disability, religion, sex or national origin. However, all applications must operate within the foundation's purpose, mission and vision. As a private foundation, our IRS categorization dictates that we award grants to organizations that are in compliance with the section 501(c)(3) and are in good standing. Because of this the foundation is unable to award grants directly to individuals.

To get started, please fill out the grant application form by filling out the form below. After submitting your application, you'll promptly receive email confirmation that your request has been reviewed. If you have any comments or questions please contact us at info@rahrfoundation.org.

Thanks for sending your message! We'll get back to you shortly.

There was a problem sending your message. Please try again.

Please complete all the fields in the form before sending.

“The Nephcure Foundation is deeply grateful for the kind and abundantly generous support it has received from the Stewart J. Rahr Foundation. Upon hearing that 8 year old Matthew Levine was extremely sick with a devastating kidney disease which has no cure, Stewart donated $100,000 dollars on the spot to the Nephcure Foundation. No hesitation whatsoever, no questions asked. Since that day Stewart has become the largest donor to the Nephcure Foundation in the world. Stewart Rahr’s philanthropy extends far beyond his financial contributions as he cares deeply about how people with Focal Segmental Glomerulosclerosis (FSGS) and Nephrotic Syndrome suffer. Stewart Rahr is a man who is passionate about providing a sense of hope in the lives of patients like Matthew Levine and the thousands others like him with FSGS. Thank you, Stewart Rahr and bless you for all that you have done!”


“On behalf of the fallen heroes I paint at The American Fallen Soldiers Project and families that our organization comforts. Stewart's involvement, continued support, and unfailing grace has brought honor and respect in ways that can not be measured to the many grieving families that have suffered this great loss. Letters from these dear parents, wives, and family members that have received portraits and know of Stewart's support for the AFSP speak of a life changing healing and restoration through the process and our joint effort. They have stated repeatedly that "Stewart is an American hero, just as their fallen son or husband". This recognition has been well earned and validated for years of support ensuring these heroes are not forgotten and their very presenceand appearance is returned home...”


“What can I say about Stewart Rahr that hasn't been said a thousand times before? Stewart is an extremely kind and generous soul who is quick to help those less fortunate. We here at the Mark Wahlberg youth foundation have had an amazing working relationship with Stewart and have found him to be a wonderful man. As for the Stewart Rahr foundation staff, there are no words to adequately describe the level of commitment and professionalism they have displayed. We look forward to continuing our relationship with Stewart and the Stewart Rahr foundation.”


“Paralysis does not discriminate. It can happen to anyone at any time! Stewart Rahr understands that life can change in a split second and a mother, a son and a loved one’s life will forever be altered. This is why we have to thank Stewart for his unwavering support of The Buoniconti Fund to Cure Paralysis and his devotion to our mission. Stewart sees the need to support the cutting-edge science which will one day find a cure for paralysis. Stewart is a long time, generous benefactor of The Buoniconti Fund to Cure Paralysis which raises funds for The Miami Project, the world’s most comprehensive spinal cord injury research center, and a designated Center of Excellence at the University of Miami Miller School of Medicine. The Miami Project’s international team more than 300 scientists, researchers, clinicians and support staff who take innovative approaches to the challenges of brain and spinal cord injury. Our Clinical Trials Initiative is designed to take discoveries found to be successful in laboratory studies and fast track them to human studies, like our FDA approved Schwann cell transplantation trial. Committed to finding a cure for paralysis resulting from spinal cord injury and to seeing millions worldwide walk again, we applaud Stewart for always Standing Up For Those Who Can’t and supporting The Buoniconti Fund.”


“Stewart Rahr is one of the world’s most innovative and generous philanthropists sponsoring young cancer scientists. Currently, Mr. Rahr is supporting a “Fab Five” Of PCF Young Investigators at 4 university cancer centers in the US. Later this year, 11 additional Rahr young scientists will be selected. These 16 Rahr young investigators will be conducting groundbreaking research in earlier detection, improved genomic diagnosis, and new precision treatments for the most aggressive forms of prostate cancer. In addition to Mr. Rahr’s enormous investment in early-career talent to solve the prostate cancer problem and impact cancer treatment in all its forms, Mr. Rahr is generously supporting with a $5 million gift the largest international team of scientists in the history of prostate cancer studying the genomics of aggressive disease . The team is studying the genomic basis of resistance and sensitivity to new medicines for prostate cancer and is generating data on over 500 patients that will be used by the cancer research community to take care of every single prostate cancer patient who comes after the completion of the project. Mr. Rahr is a game changer in funding cancer research.”


“It takes more than a magic wand to grant the wishes of children with life-threatening medical conditions – it takes partners like the Stewart J. Rahr Foundation. All of us at Make-A-Wish® Metro New York and Western New York express our heartfelt gratitude for the historic pledge of $10 million in celebration our 30th anniversary and the granting of our 10,000th wish. One wish child expressed the long-lasting benefit of a wish with these words: "You gave me confidence for the future." The confidence that the Stewart J. Rahr Foundation has shown in Make-A-Wish through this landmark gift will have an enormous impact on our ability to make dreams come true for future generations of wish children, a future that will likely see the need to grant the next 10,000 wishes not in 30 years, but in the next decade. Beyond these incredible financial resources, thank you for inspiring so many wish children and families with your compassion and your deep commitment to our mission.” 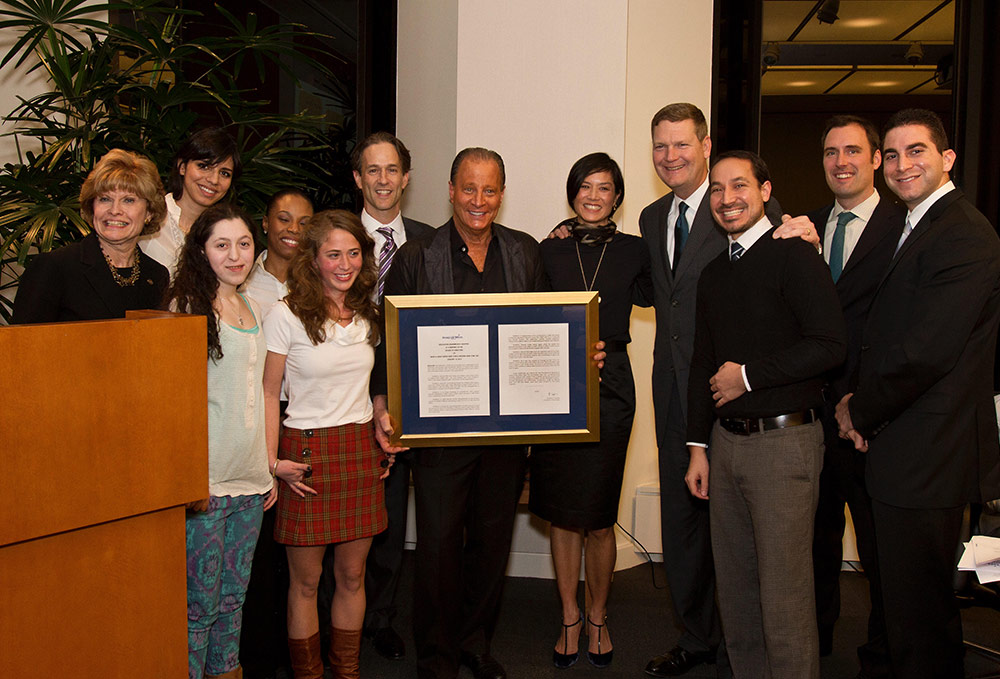